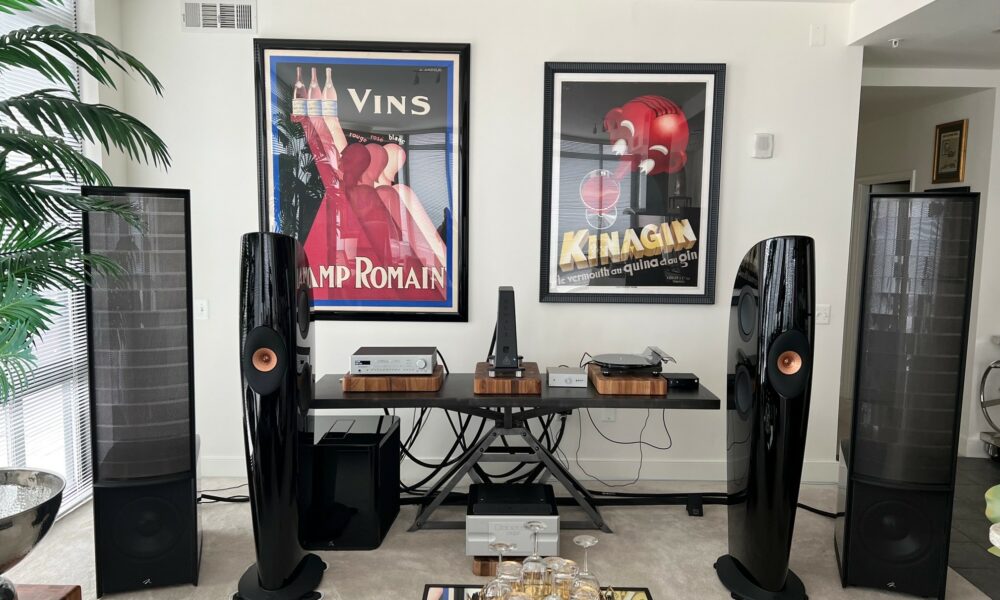 Today we’d like to introduce you to Russell Katz.

Hi Russell, we’d love for you to start by introducing yourself.
A MUSICAL JOURNEY

I’ve been addicted to music since I was about 8 years old. I watched my share of television, but my Dad taught me early on that I could be entertained by listening to music, and to old time radio programs. My Dad had a classic system from the early 60s that he purchased while attending the 1964 World’s Fair in Queens, New York. He bought a Fisher 500C FM receiver, a pair of AR 2AX speakers and a Dual 1009 turntable.

My Dad introduced me to some of the radio programs that he used to listen to when he was a kid. I sat for hours being transported to a different era, listening to “The Lone Ranger” , “The Shadow”, “Fibber McGee and Molly” and George Burns and Gracie Allen. Even though his system would be considered of midrange quality by today’s standards, there was something about the sound of those tubes, in the Fisher, that sounded great to me.

When it came to music, both of my parents loved Classical music, and they made a point to expose me to the likes of Beethoven, Chopin, Mozart, Holst, Gershwin, Sergei Prokofiev, Bizet, Brahms, and Tchaikovsky. My favorite classical recording was Leonard Bernstein’s version of Peter and the Wolf and the Nutcracker Suite. I’ve recently bought a copy for myself at a garage sale for .05.

My Dad also liked Jazz, and introduced me to Al Hirt, Stan Getz, and most importantly Herb Alpert & the Tijuana Brass. My favorite Herb Alpert album was “Whipped Cream and other Delights”.
The entire album is great, and still stands up today as one of my favorites, but my favorite song is a “Taste of Honey”. I wouldn’t be exposed to the Beatles’ version for a couple of years. Not only did this album introduce me to Jazz, but it also introduced me to women. The album cover is still one of the sexiest ever made.

I wasn’t really exposed to Rock N Roll until I visited my cousins Hal and David. My Cousin Hal was a few years older than me. As a young kid, he was my idol. His room was awesome. He had fish tanks everywhere. The tanks held Oscars, and Firemouth’s, and a bunch of other really colorful fish. I’d watch in amazement as he fed the Oscars live Goldfish.

He also had a couple of guitars and some large guitar amps scattered around the room. He also had a huge record collection with some massive speakers. He was listening to The Edgar Winter Group, The Who, Led Zeppelin, Deep Purple, Neil Diamond, The Beatles, Stevie Wonder, and many other classic bands.
After listening to Neil Diamond’s “Solitary Man”, and The Who’s “My Generation”, I was hooked.
Music would consume me from this point on.

I started mowing lawns soon after this visit to earn enough money to buy myself my own stereo, and to start buying every record that I could. At the age of 13, I bought a Radio Shack Quadraphonic Receiver, a Dual 1228 turntable, and 2 pairs of Marantz Imperial speakers. My first album was Elton John’s “Greatest Hits” and Freda Payne’s “Band of Gold”. I then got hooked on The Beatles, and the Electric Light Orchestra, and bought every record that they made.

The first concert I ever attended was at Forrest Hills Tennis Stadium in New York. I was 16, and went to see Joni Mitchell. I think our tickets cost about $12.

At 18, I started collecting everything by The Who, and The Doors. I was blown away by The Who after watching the band’s movie “The Kids Are Alright”. I finally got to see “The Who” perform in 1982 at the Capital Center in Landover, MD. I had 12th row floor seats. The concert was awesome. I was interviewed about my concert experience by Phil Hosmer a Diamondback Writer at the time. and had my quote appear in the Diamondback Newspaper the following day. I got interested in The Doors after reading the book “No one Get’s Out of Here Alive”. The book inspired me to read Jim Morrison’s poetry, and to start writing some of my own poetry too.

In addition to music, I’ve always been a sports fanatic. I grew up in New York rooting for the Yankees, Giants, Rangers, and Knicks, and played every sport while it was in season. In college, I was the quarterback of our Dorm’s Intramural Championship Team, and listened to both The Who’s “Love Reign Over Me” and The Doors’ “When the Music’s Over” to get pumped up before each game.

My first job out of college was as an Assistant Manager for the large record retailer “Record World”. I was still living with my parents, and had no expenses (Thanks Mom and Dad) so every penny I made was spent buying more records. The people I worked with at The Record World Store in Bowie Marketplace expanded my musical horizons. I got turned on to Howard Jones, Michael Franks, The Clash, The Talking Heads, Blondie, The Police and a bunch of other New Wave Bands.

I jumped to the audio business in 1986 when I became the Assistant Manager for “Audiokrafters”, located in College Park, Maryland. We sold “Acoustat”, “Bryston”, “Allison”, “KEF”, “Tandberg”, “Mcintosh”, “NAD”, “Velodyne”, “Boston Acoustics”, “Bang & Olufsen”, ”Counterpoint” and “Nakamichi”. During my time with the company, I was the Service Manager, Custom Installation Manager, Buyer, and Store Manager for 3 of their locations. Working in the audio business allowed me to hear how great my music could sound.

Jumping forward 30 years, music is still my life. I decided to create “The Vinyl Revivers” after attending a used record show and watching people buy used records without getting them cleaned. I started The Vinyl Revivers with the hope of introducing a new generation to vinyl records, and cleaning them to maximize their enjoyment. I added The Audio Hunters to let consumers know that I carried high end audio equipment in addition to the vinyl cleaning. I have since created a record store in my home showroom, and currently have over 4000 new titles in stock. I carry all of the audiophile labels including Analogue Productions, Blue Note, ECM, Craft, Groove Note, Impex, Intervention, Mobile Fidelity, Music on Vinyl, OJC, Opus 3, Speakers Corner, Reference Recordings, Telarc, Yarlung and more. On the audio side, I carry Accuphase, Bryston, Cyrus Audio, Dynaudio, Fyne Audio, Gold Note, KEF, Martin Logan, Mobile Fidelity, Parasound, Primare, Pro-Ject, Quad, Rega, Sonner Audio, SOTA, Wharfedale, and more.

I’m sure you wouldn’t say it’s been obstacle free, but so far would you say the journey have been a fairly smooth road?
It has been a pretty smooth road although I’ve grown so much in the last few years that I’m finding it difficult to keep up with the demand. Covid has definitely had some positive and negative impact over the last couple of years. My business has tripled once people were allowed to work at home, concerts were cancelled, and restaurants were closed. I think consumers started to get back into music and decided that if they were going to be stuck in their homes that they would improve their audio systems so that they could get more enjoyment from their music. However, Covid impacted manufacturing and the supply chains. I’ve had some customers wait as long as nine months to get their products delivered.

Can you tell our readers more about what you do and what you think sets you apart from others?
I’m most known for giving consumers a one on one opportunity to audition equipment in a home environment that will closely resemble what they’d experience in their own homes. All of my equipment is hard wired. I don’t use any switch boxes, and only one pair of speakers is displayed at a time. Unlike the big box stores who have all their speakers placed in a line against a wall, my speakers are placed properly in my room. In many cases they are pulled out from the wall to demonstrate how great they are capable of sounding. My equipment is demonstrated with no distractions from other customers, phone calls, or doorbells ringing. My typical customer stays for about 2 hours enjoying music, and getting to know each other. My goal isn’t to make a quick sale, but to establish long term relationships where I’m considered a trusted friend as opposed to some sales guy. In respect to my record store, I believe I am the only company that offers a free cleaning in an Audiodesk Ultrasonic Cleaner, and a free Nitty Gritty antistatic sleeve for any vinyl record that is purchased from me. While not unique, I also offer installation of equipment and in wall/in ceiling speakers.

What are your plans for the future?
My plans are to continue carrying the best sounding products that are within reach for the average consumer. I have also recently opened a second location in Bethesda, Maryland that is called The AHH Experience (The Audio Hunters High-End Experience). I currently have the following products on display-KEF Blade 1 Metas, Martin Logan Renaissance ESL 15As, Martin Logan Impression ESL 11As, a Martin Logan Balanced Force 212 subwoofer, a Bryston BR-20 preamp/streamer/DAC, a pair of Bryston 7B3 mono block power amps (on order), a Pro-Ject RS phono stage, a Rega P8 turntable, a Bryston 4B3 power amp, and a pair of Wharfedale Elysian 4 speakers. I’m planning on having a room, and six tables for records at the Capital with Audiofest in Rockville, MD in November. I’ll also continue to have tables at the bi-monthly Love the Music Record Show in Silver Spring, MD. 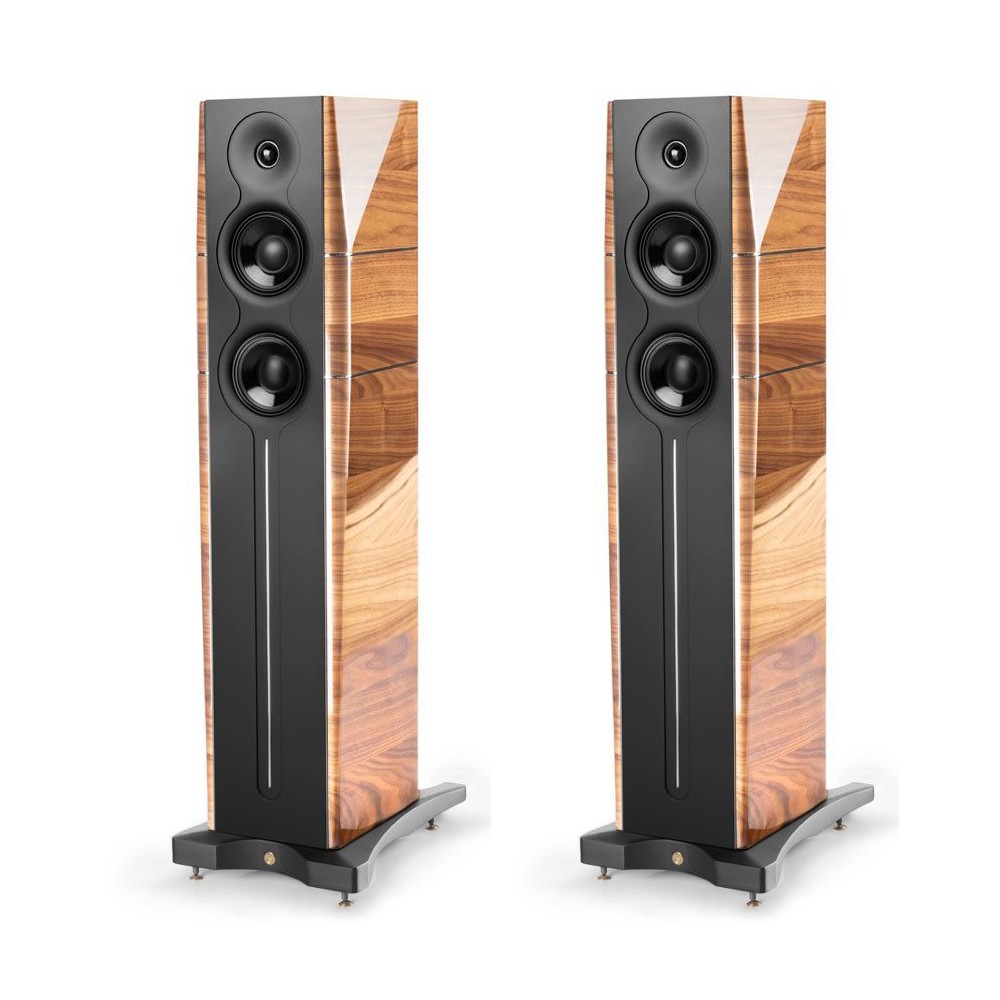 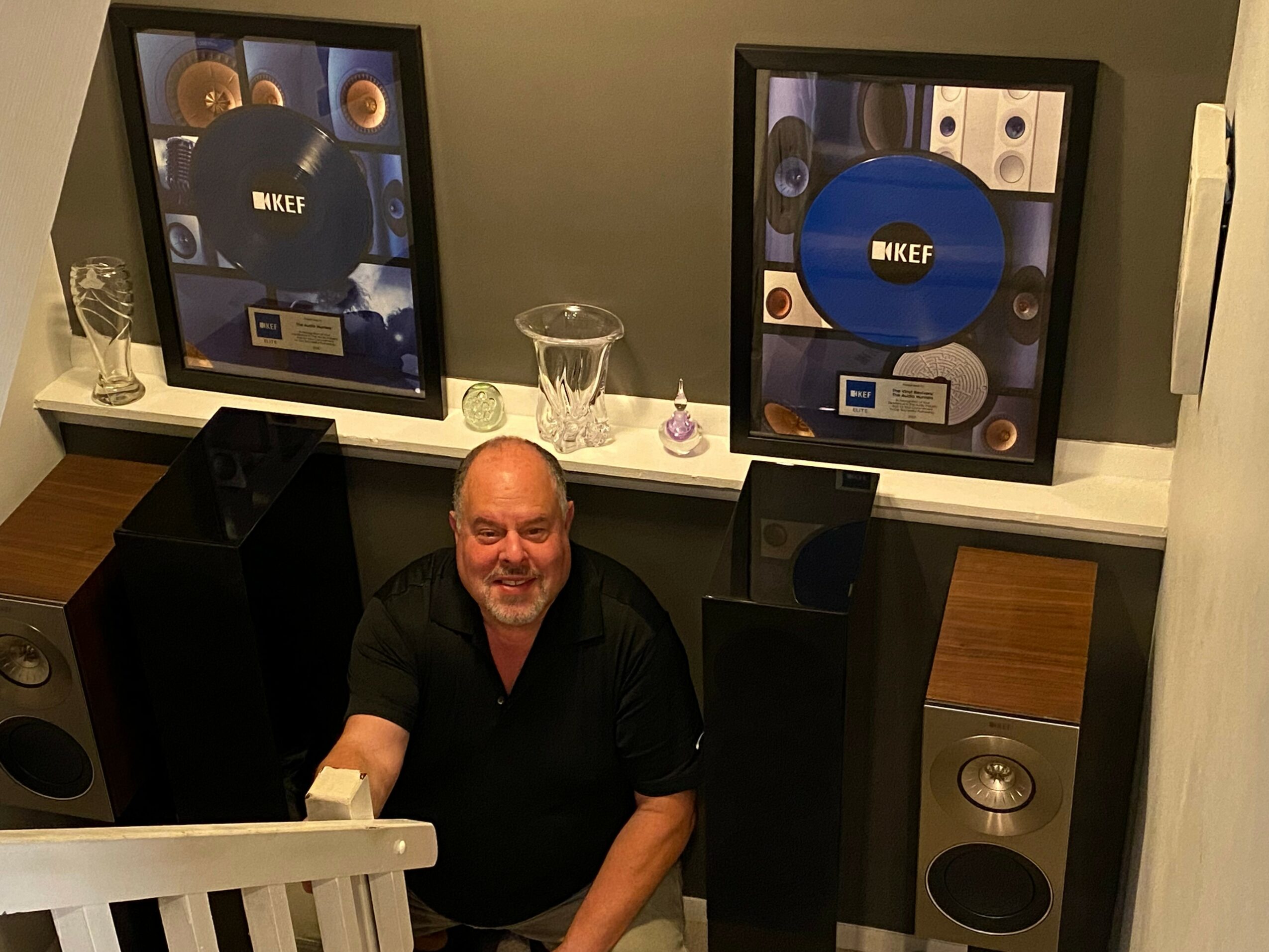 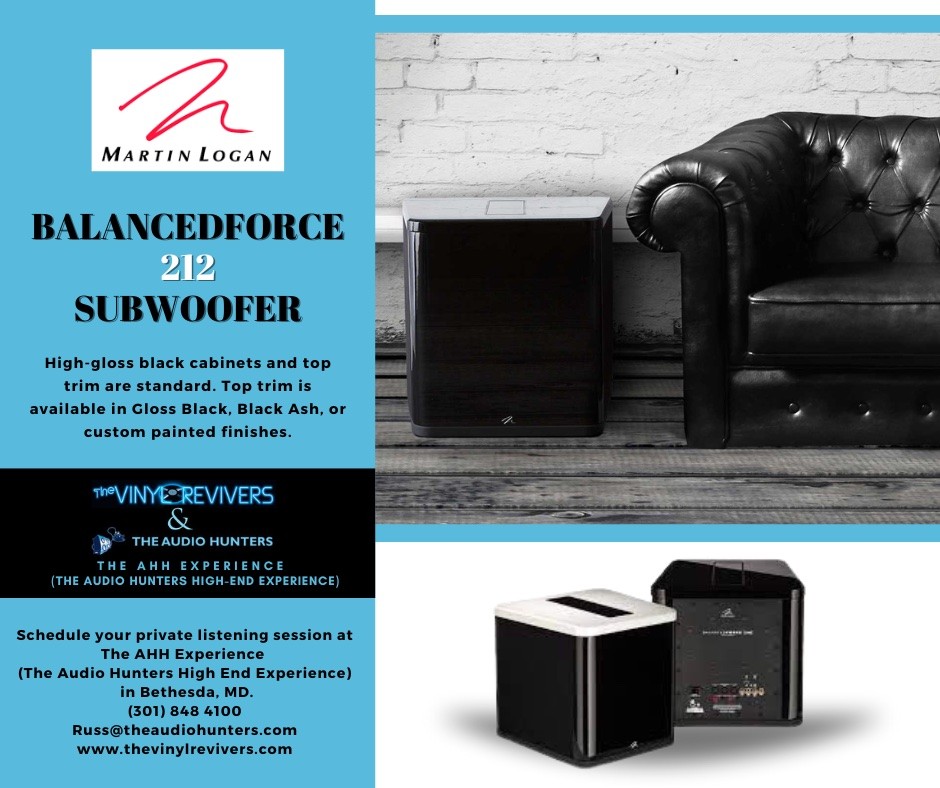 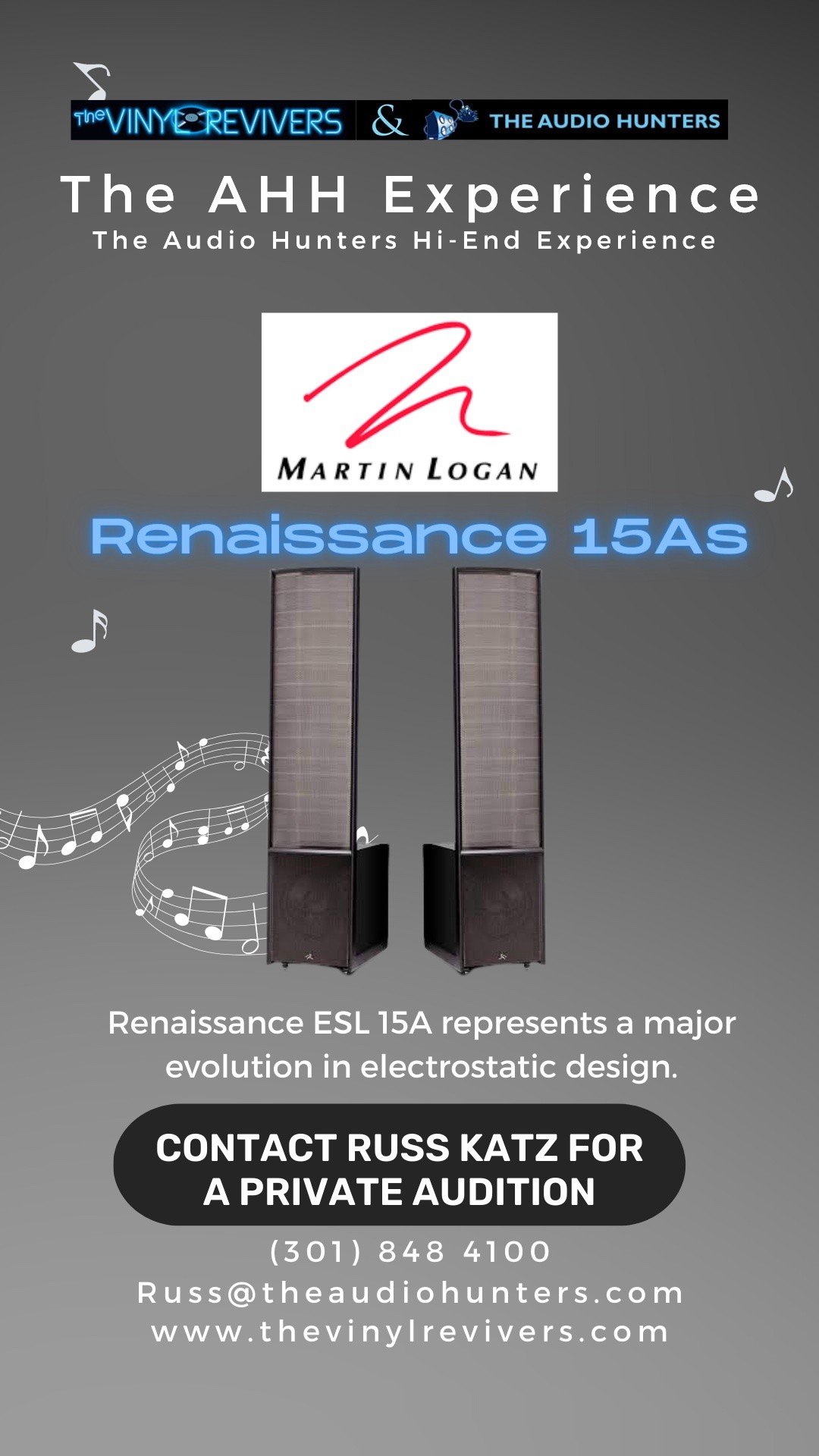 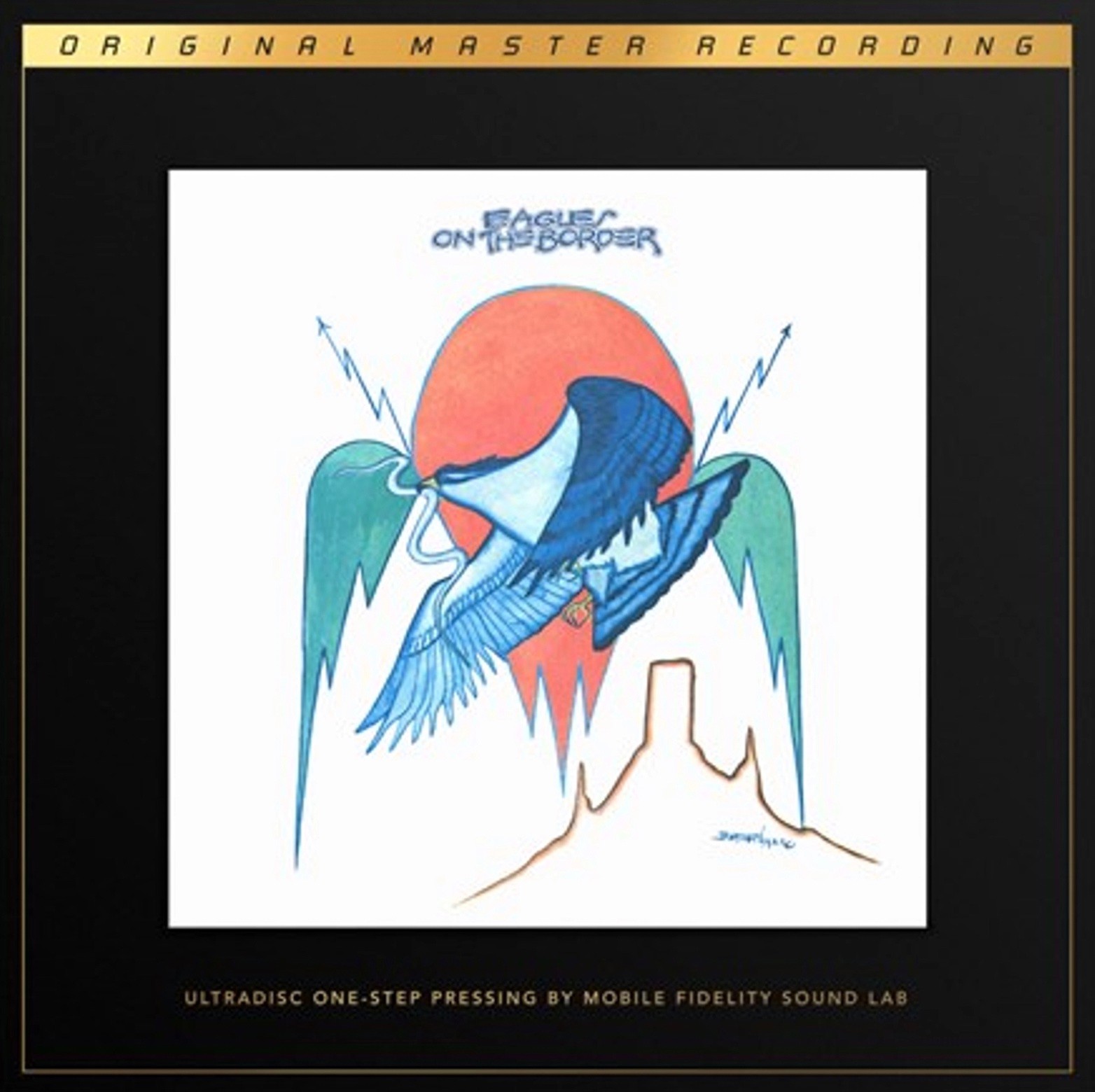 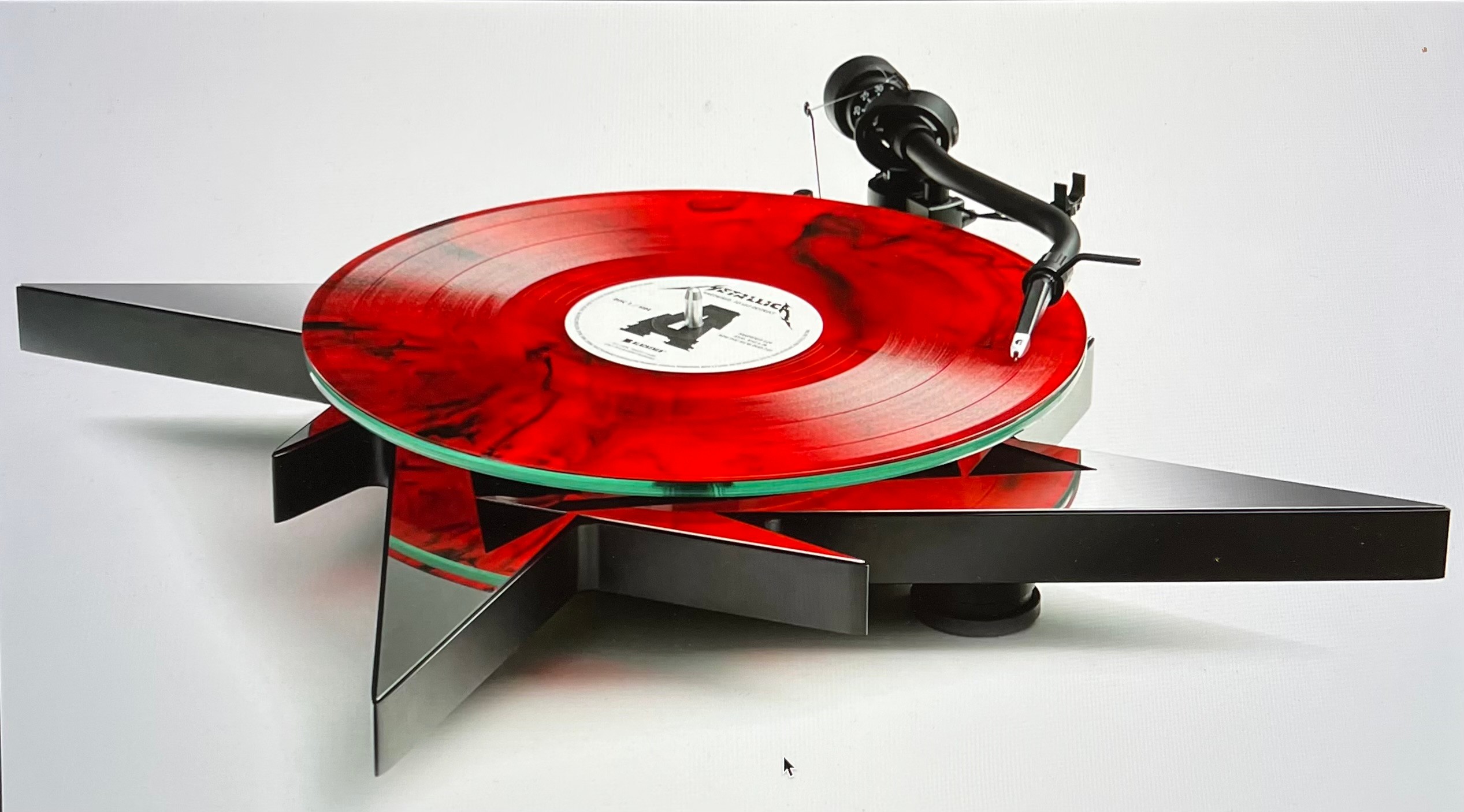 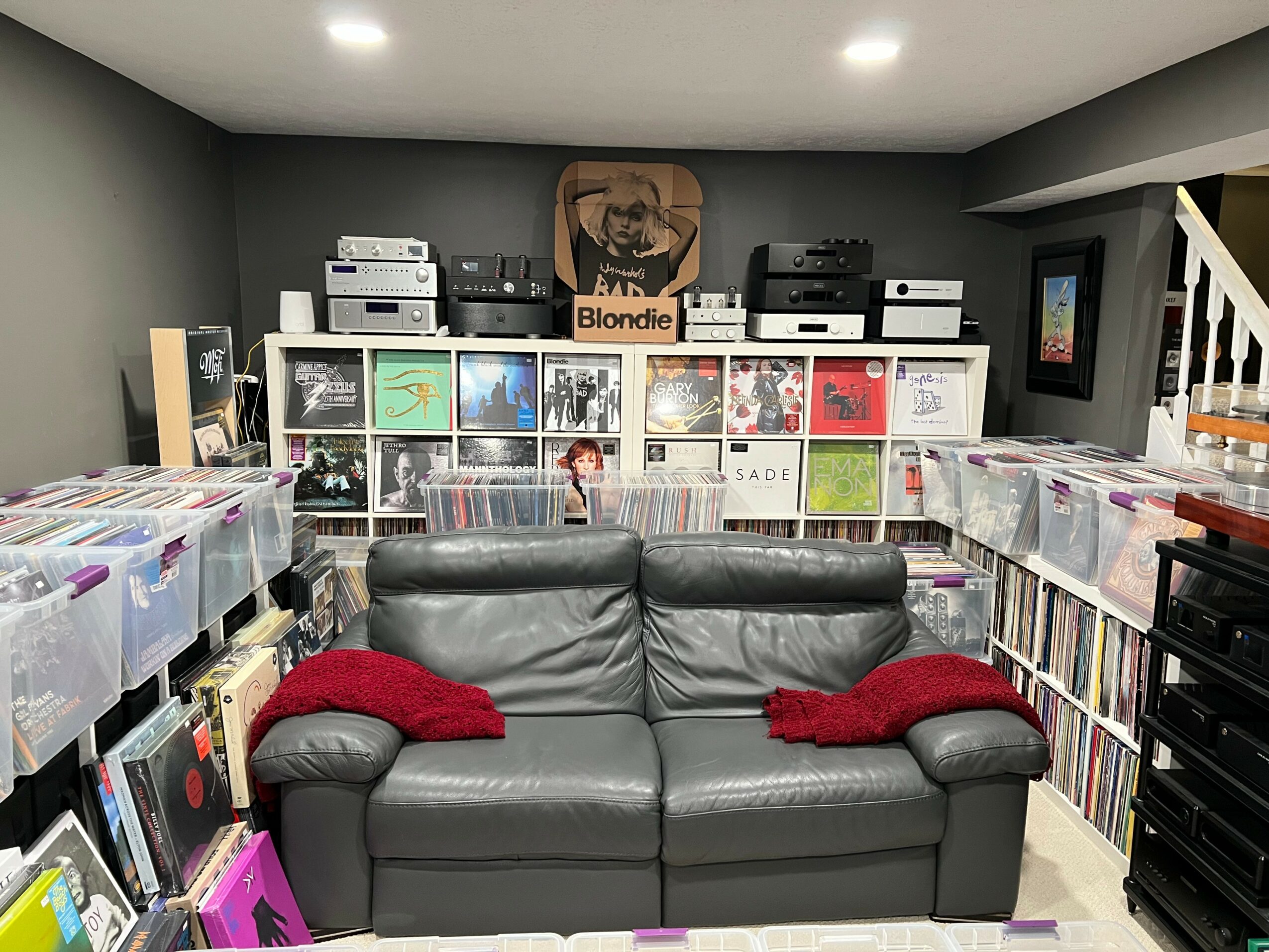 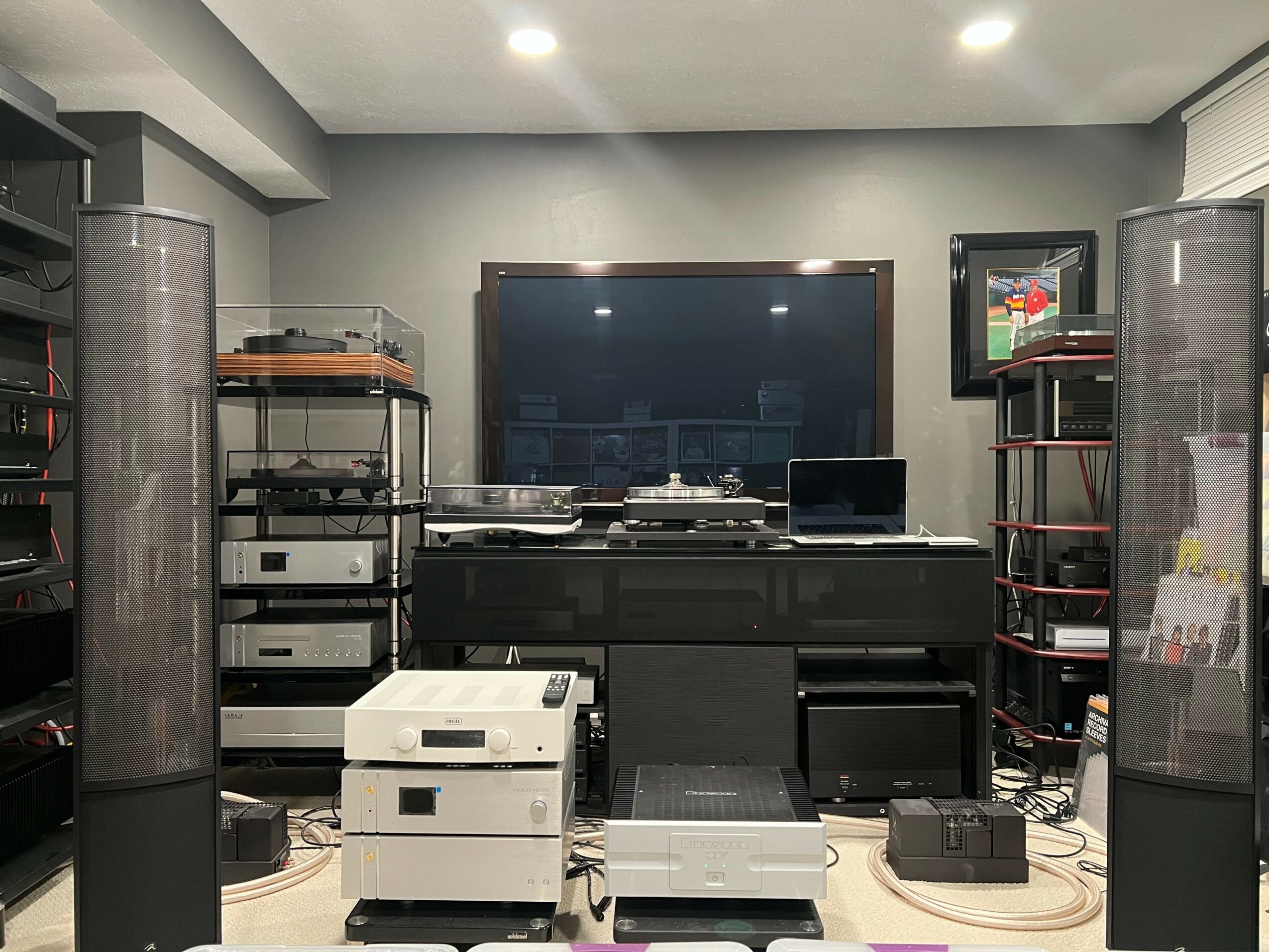